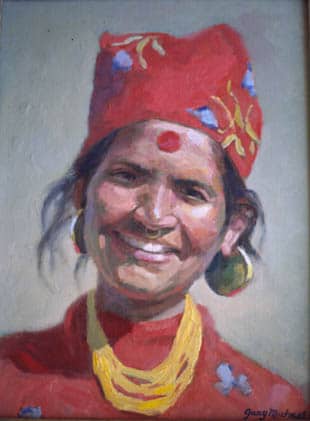 Gary is a native of Denver and lives there still—seven blocks from his birthplace, half a block from where he grew up. That doesn’t mean he doesn’t get around. In the pursuit of subject matter — and to visit various museums — he’s been all over Europe, including Russia, parts of South America, Australia, Asia (three times to Nepal, once to India), Africa and Antarctica.

Prior to becoming a full-time artist, he acquired masters degrees in philosophy and English and a PhD in humanities and was a college professor. He now boasts that ”with my three advanced degrees I can buy coffee most anywhere.”

His art education came not from art school but hanging around established artists who were kind enough to share their knowledge with him. He credits Pawel Kontny, Ned Jacob and Burt Silverman with having been particularly helpful. Two weeks in a Sergei Bongart  workshop he calls “transformative.”

Gary has given workshops in CO, WY, NM, AZ, ID, CA, NE, KS and Mexico. He also taught at the Art Students League of Denver. He was the opening speaker at the Plein Air Convention in Monterey, CA. He brings the same passion to teaching he does to painting.

No surprise that a guy who finds most artist statements “predictable” comes up with unusual ones of his own:

“I’m a painter of moods in people and places. But my own are there too, the objective and subjective in rapturous confluence.”

“Imagination is my primary resource and last resort. The more I rely on it, the more personal the paintings.”

“My subject matter has its counterparts in the work of many artists, so, with few exceptions, my themes and motifs are hardly singular. I can only hope they are alchemized by my sensibility and transformed by the obliquity of my gaze.”

Clearly Gary has as much fun with words as with colors.